I am renting at the moment but doors have no locks, so i am planning to build a system that sends me a warning whenever the doors is cracked open. I am think to use Weibo (twitter in China), and email. it will also activate the CCTV system and start recording.


The following is the diagram that roughly explains how it works. 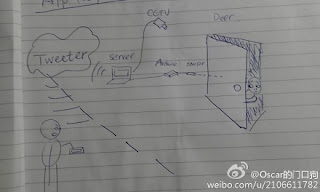 After setting up the demo code on the XAMPP server, i go to

it's not going to ask you for the username and password, it will just log you in with the account you are currently using.
so if you don't want to use your main account for testing, then login with your testing account before carrying out this step.

i then ran into this error:

After googling it, i realized i haven't enable some function in the PHP server.

After the first problem was solved, i had another problem:

发送失败，错误：21321:applications over the unaudited use restrictions!

Solution: Because my app on Weibo isn't authorized yet, so I need to add the test accounts manually on the setting page (open.weibo.com), with the account UID, which is http://www.weibo.com/2106611782, the number bits.

And finally, it works!

Okay, I am so happy my idea of doing this project on Weibo I posted few days ago got reposted by some Arduino guys, and quite a few people noticed and commented! hoo hoo! I guess that's quite a motivation for myself.

On friday, i did some research and (finally?) got the VB email program working, although it requires a library called EASendmail to do so.

Today, I also got the PHP code for sending Weibo twitt using address bar down. Now it's working in the VB program...

Next step would be to use arduino to send command to trigger this via USB...

now the problem comes to the CCTV... how am i going to turn on the CCTV and start recording... where to store the data to... one option would be to take videos every 10 seconds and to store the 10-second video files onto the dropbox folder, and these files will be uploaded immediately. recording period might be  a reasonable time like 5 minutes? or 10...

PS: for the photo-transistor Resistor, I had to use something around 100k to achieve good result at the end!

The IR sensor code I wrote last time isn't working very well, so I re-wrote it with fewer lines and better performance as well :)

I dumped the calibration function, and take the on and off IR value each time and compare them, which gives a more accurate and responsive result.